A spate of road building projects in and around the most popular trekking area in Nepal has sparked a battle involving local people, tourist entrepreneurs and developers.

The Annapurna region is one Nepal’s main attractions, attracting some 40,000 to 50,000 trekkers every year who enjoy its pristine mountain trails, valleys and spectacular scenery.

Ghandruk village could previously only be reached by a day-long trek largely uphill through beautiful rhododendron forests.

But recently, a dirt road was built linking the village to the nearest biggest place, Kimche, which can now be reached in just one and half hours.

Khusi Bahadur Gurung, an elderly local man, grins at the inroads made by development in his village.

“Road development is good for us people. It will lead to easier transportation,” he said.

Dilu Gurung is a small-time hotel operator, relying on the trekking business and tourism. 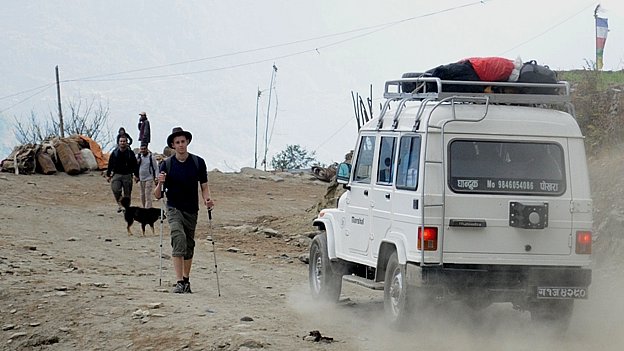 “I fear it could affect tourism if a proper road reaches here. The roads should be kept to some distance away from the village,” he says.

Trekkers who come here in search of serenity are not amused at finding jeeps flying past them, leaving behind clouds of dust and fumes.

“The reason we came here is to get away from the city of Kathmandu, which is very busy,” said Denis Ahern, an Australian trekker.

“We prefer quiet and the countryside. So, the less traffic, the better.”

In many trekking regions, roads have been developed, slowly encroaching on what were once fairly remote, untouched places.

But trekkers say the roads should not be constructed, at least, not near popular trekking routes.

Rajat Agrawal, a trekker from Kathmandu, says: “We are not against road development. But they should be kept separate so that everybody benefits.”

Karma Sherpa, a trekking guide, complains that the roads are often not even that good.

“You know what, the roads here are not even properly developed. They are poorly managed and only add to existing problems,” he said.

Traditional tea-houses along the trekking routes say they have begun to find their businesses affected with the building of roads.

Conservation officer for the Annapurna Conservation Area Project (ACAP) in Ghandruk, Paras Bikram Singh, believes roads have led to a fall in the number of high-value tourists, and thus income for the local population. 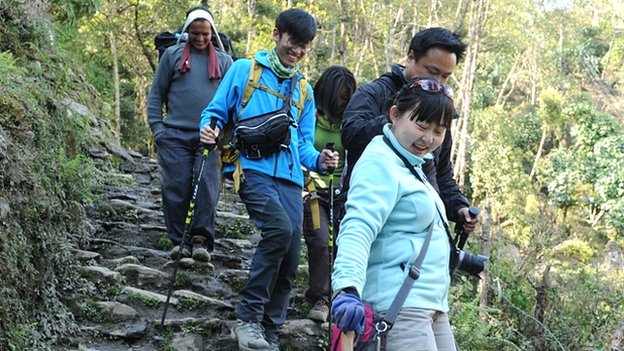 Tourists are drawn from across the world to Nepal

Officials from the Trekking Agents Association of Nepal (TAAN) have been working overtime to develop new trekking paths to continue attracting the trekkers.

“Since we have been unable to convince the local people of the importance of preserving the serenity of the trekking region and since we cannot outright deny their development aspirations, we are now focusing on developing new trekking routes,” says Ramesh Prasad Dhamala, president of TAAN.

He said that more and more trekkers have already started to use the alternative Manaslu trekking region.

But he pointed at the need for the development of sustainable practices for the long term.

Until then, the struggle to balance the needs of trekkers for unspoilt terrain, and the needs of local people for development will continue.

By MICHAEL CASEY, CONCORD, N.H. (AP):- A Salvadoran man who claims he was jailed, beaten and tortured after being wrongfully

Federal judge halts preparations for end of US asylum limit

By KEVIN McGILL, NEW ORLEANS (AP):- A federal judge ordered a two-week halt Wednesday on the phasing out of pandemic-related

By MENELAOS HADJICOSTIS, NICOSIA, Cyprus (AP):- Cyprus will install an electronic surveillance system along the buffer zone that divides the

3 Preparations for May 13 election over: EC