A group of victims from five decades of conflict in Colombia has for the first time joined left-wing Farc rebels and government negotiators in peace talks.

The negotiations were launched in October 2012 and have been taking place in the Cuban capital, Havana.

The victims told the BBC’s Sarah Rainsford in Havana that they were listened to by the negotiators with a great deal of respect.

One woman whose entire family was killed by left-wing militants said that being able to look Farc members in the face was “the most important meeting” of her life.

At least three million people have been displaced by the conflict. Most of the victims were civilians.

Colombian President Juan Manuel Santos hailed the direct involvement of the victims as a historic step towards ending the conflict.

The group of 12 people attending the talks include victims of left-wing rebels as well as those who have suffered at the hands of right-wing paramilitaries and government’s security forces.

That has led to criticism in Colombia, said the BBC’s Arturo Wallace in Bogota. 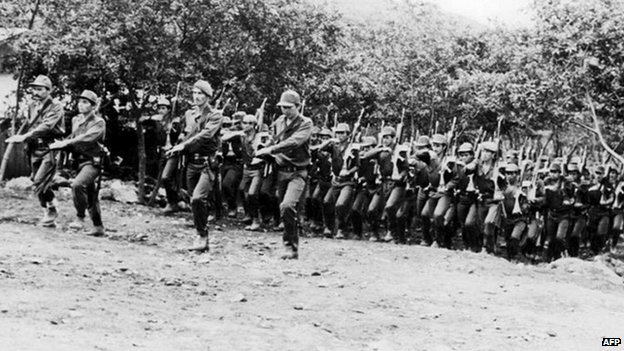 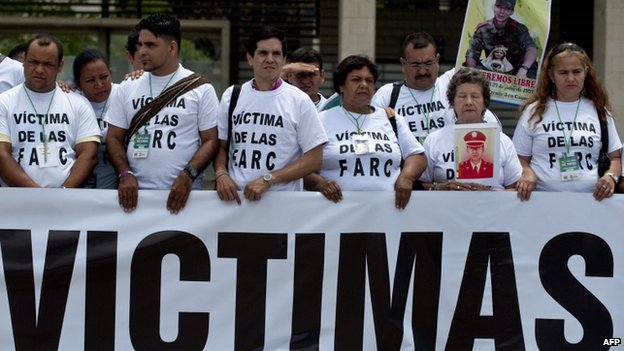 Some people believe that only those affected by the Farc’s violence should have travelled to Cuba to attend talks with the rebel group.

But the United Nations High Commissioner for Human Rights Navi Pillay praised the move, calling it unprecedented and a potential model for other countries dealing with issues of justice, peace and reconciliation.

Sixty people in total have been selected to join the negotiations in Cuba over the next weeks.

For decades left-wing rebels and the government rejected allegations of human rights abuses and blamed each other for the deaths and the displacements.

But in June the rebels acknowledged that there were victims in the conflict, in a statement that was seen as extremely significant in Havana.

The “victims of human rights abuses” have the right to the truth, justice, compensation and the guarantee that such violations will never happen again, says the document.

The talks are aimed at getting the Farc to sign an agreement renouncing to its armed struggle in order join the legal political process.

There has been agreement in three of the six points on the peace agenda – land reform, political participation and illicit drugs.

Once both sides reach an agreement on the rights of the victims, they will negotiate the two remaining issues: disarmament and the implementation of the peace deal.

AIPEI,, (AFP):- Taiwan blasted its “evil neighbour” on Friday after China encircled the island with a series of huge military

Pelosi says US will not abandon Taiwan as China protests

1 The Danger of Nuclear Reactors in War